Results of Surveys about the Returnee Experience

Thank you all of you (45 people) for your answers.
This is the brief summary of the survey I’ve taken from June 5th to July 2nd.
These responses gave a better and further understanding to returnees and about their experiences.

1. How did you find about the research?
There were 45 responses in total for this survey. 60percent knew the researcher, me and other responses were from introduces, a certain link and others.

2. Do you consider yourself a returnee?
As shown in the graph, 87percent (39 people) consider themselves as a returnee.

Looking at the main reasons for each answer, 19 people who answered “Yes” consider themselves as a returnee because of their years living abroad. Some people specified that the age of living overseas also mattered for them to consider themselves a returnee. Also, answers with more than 3 people are feeling difference/can’t blend in Japanese society, the fact coming back to Japan, and having a different perspective from others.

3. Choose the number of years that you have lived overseas. 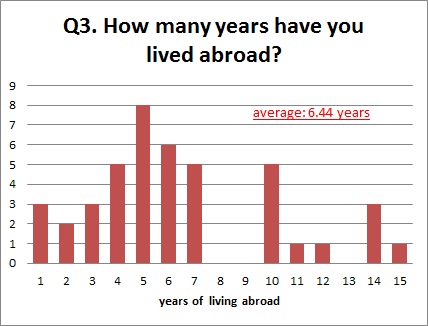 The average of the years people have lived overseas was 6.44 years in this survey. 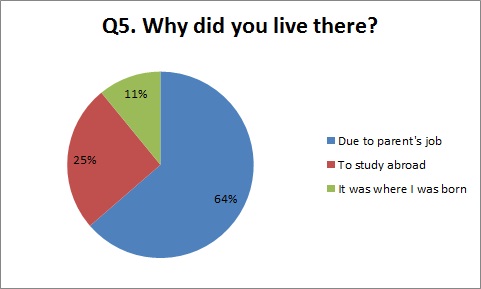 64 percent (35 people) lived overseas because of their parent’s job.

7. How old are you?
People from 16 – 30 gave response. The majority was from 19 to 22 which I assume because of the people answering who mostly knew the researcher in person.

8. What languages did you learn when you were abroad?
33 people answered that they went to school (local, international, and weekend schools) to learn English. 4 people answered they learned Chinese including not only people who lived in China. Also, there were other people going to local schools and private schools learning a different language including French.
6 people mentioned they went to Saturday schools to learn Japanese and 3 people said they studied Japanese in a local school which were people living mainly in Asian countries.
Other than that, there were few people who learned a language naturally (with family, living in that country).

There are various ways to learn a language. However, looking at the data, there seems to be a wider range in the ways to learn a language (besides from school: private lessons in school, out of school…) in non-English speaking countries. Many people especially seemed to not have many chances to speak Japanese in the country they lived, so even when they are out of Japan, they went to some kind of school to learn Japanese.

9. When you lived abroad, did you learn a second — or another — foreign language in school ?
Some people have learned a 2nd or another language in school including 5 people learning Chinese and 4 people learning Spanish. It seems that it depends on what age you were abroad and the place (country/school) you were abroad if you have learned another language or not.

For most people, it seems that what language you speak depends on who you’re speaking with or where you are (situation) i.e. Public/weekend school/local school

Especially people living in a non-English native country, people used more than one language during their oversea experience.

11. What languages can you speak fluently?
26 people said they can speak English and Japanese fluently. There were others that told they can speak another language which are native languages (their parent’s mother language, born in that country) for them. There are many ways to measure fluency (by self-judgment, certain exams and so on) so it’s hard to predict about this. However, in this survey, many returnees think that they are fluent in English and Japanese which often seems to be a characteristic thing about returnees.

13. Give your rating for the degree of difficulty you had in the experiences below.

Even though, many people consider themselves in the same category, “returnee” everyone has a different impression and the way they felt in their oversea experiences. 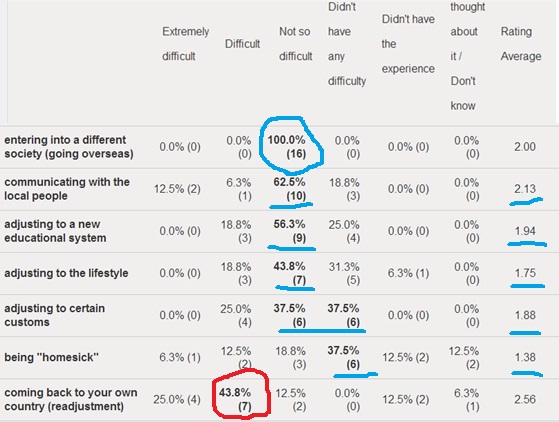 Compared to that, people who didn’t have much difficulty entering a different society/country, a lot of them answered that they felt not so difficult in other experiences too. However, many people seemed to have a hard time readjusting the most.

Also, some people said they had other difficulties including racism issues, language, food and others.

14. Did you consider yourself a foreigner when you lived abroad?
26 people said they considered themselves a foreigner when they lived abroad. However, there were 10 people who answered “No”. The main reasons for the “No” are they lived in a country which doesn’t have an idea of “foreigner” because many people from various countries gather there so he/she was never treated as a foreigner. Also, people who didn’t have much experience living in Japan said they felt they were pretty much like a native in that country.

15. What do you consider your home country/ culture? And, explain why you think so.
27 people answered Japan is their home country/culture. The most common reason was nationality, place born, family living, blood which are objective facts. Also, there were people who mentioned reasons like their way of thinking, their comfortableness in Japan and the environment growing up (food, parents, rules in the family etc…).
Also, those people who answered Japan as their home country mostly have positive impression to their own country like convenient place to live and full of hospitality. There were also negative impressions like you have to be normal like everyone else.

Other people who answered another country including the U.S said because that is the culture they were taught and they spent most of their time of life there.

16. Have you had any experiences being treated differently from others due to being perceived as a returnee?
25 people answered “Yes”. The most common experience people had was everyone asked them to speak English for fun always and they got picked/teased/left out (6 people each). Also, there were responses like (too much) expectation and jealousy towards returnees, always given some sort of label (“returnee”, different from people and so on).
Also, on the “No” side, people said their environment and surroundings were welcomed to them.

17. Do you have any “pet peeves” (a word, phrase or expression that annoys you) regarding being a returnee?
11 people answered that they have an expression they don’t liked to be said. The most common answer was “oh… you’re a RETURNEE”. Looking out through, many people are irritated in others exaggerating that they are in the certain group, “RETURNEE” and makes you feel that you are different. Also, there were answers mentioning that they were said to be lucky going overseas, being able to speak/use foreign language fluently and it’s unfair.

Thank you again all for your answers! It became a great introduction to my study for returnee identities and perceptions about them. I will be using these responses wisely for my project.