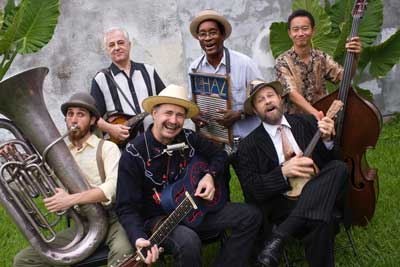 Born in Mississippi in 1956, Steve Gardner is an accomplished blues musician and photographer, having studied photojournalism at the University of Southern Mississippi and blues from the “School of Hard Knocks.” After working as a photojournalist in the States, he came to Japan, where he has freelanced for Japanese magazines as well as for Time and Newsweek. The interest in the blues that he found in Japan led him to create a picture book on Mississippi and the blues, Rambling Mind (1994). His first CD, “Rambling With The Blues” (2002) is this book’s musical counterpart. He recorded another CD in New Orleans, Louisiana, “Walkin’ the dog” (2008), and his newest release is a album named “Hesitation Blues.”

Through his music and stories, Steve Gardner will take us on a journey to Mississippi and show us where the blues came from — both geographically and spiritually. He will also speak about southern food culture and how that has been represented in the Blues.

IE Core and Seminar teachers, as well as teachers of Reading I or II, should feel free to bring their classes to this special event.

Here is an article about Steve Gardner that was written by a professor in our department, Wayne Pounds, for the Metropolis magazine. It shows some of Mr. Gardner’s excellent photography and puts his music into historical context.

Click on the graphic (below) to access some fine blues songs about southern cooking, especially the art of barbecue.