Welcome to the 2019 Academic Year

We welcome you to the 2019 academic year! Wishing students and teachers an adventurous, enjoyable, and productive year! 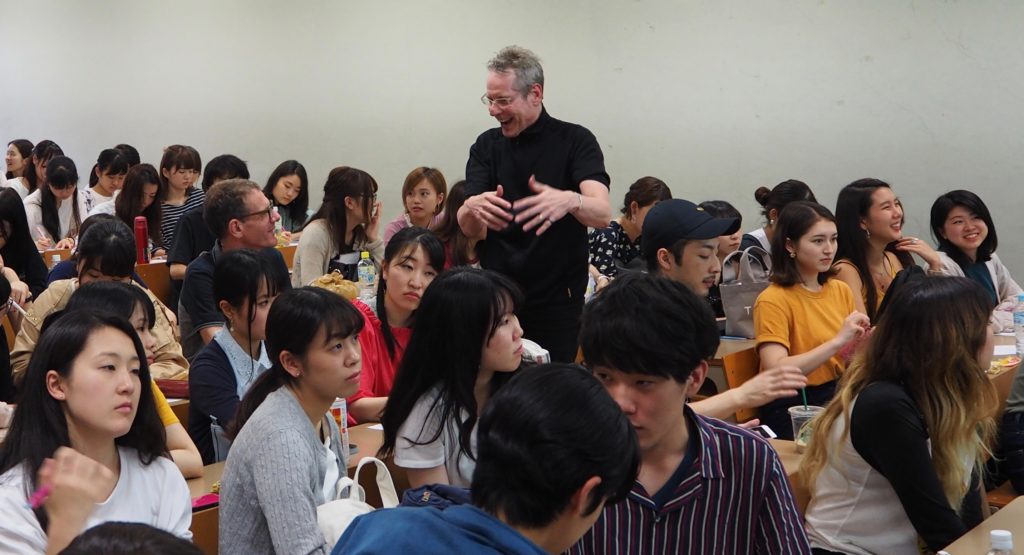 A Successful Completion to 25th Year of IE Program

This month marks the successful close of the 25th year of the IE Program. We wish this year’s graduates all the best in their future endeavors. 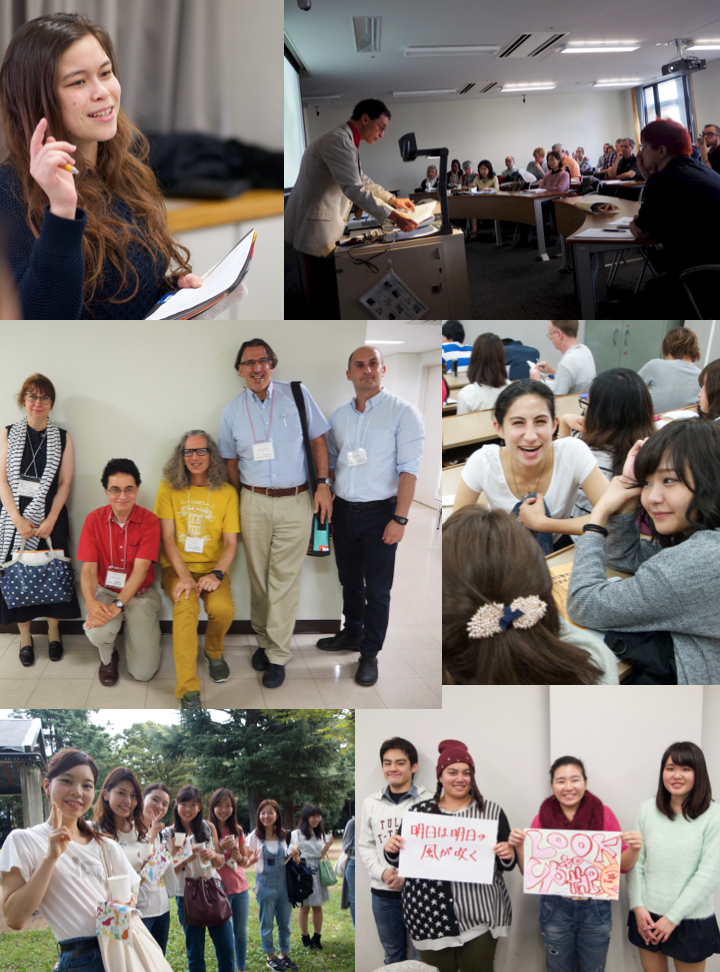 Here’s the schedule for the 2019 Academic year. Click on the image to view the PDF: 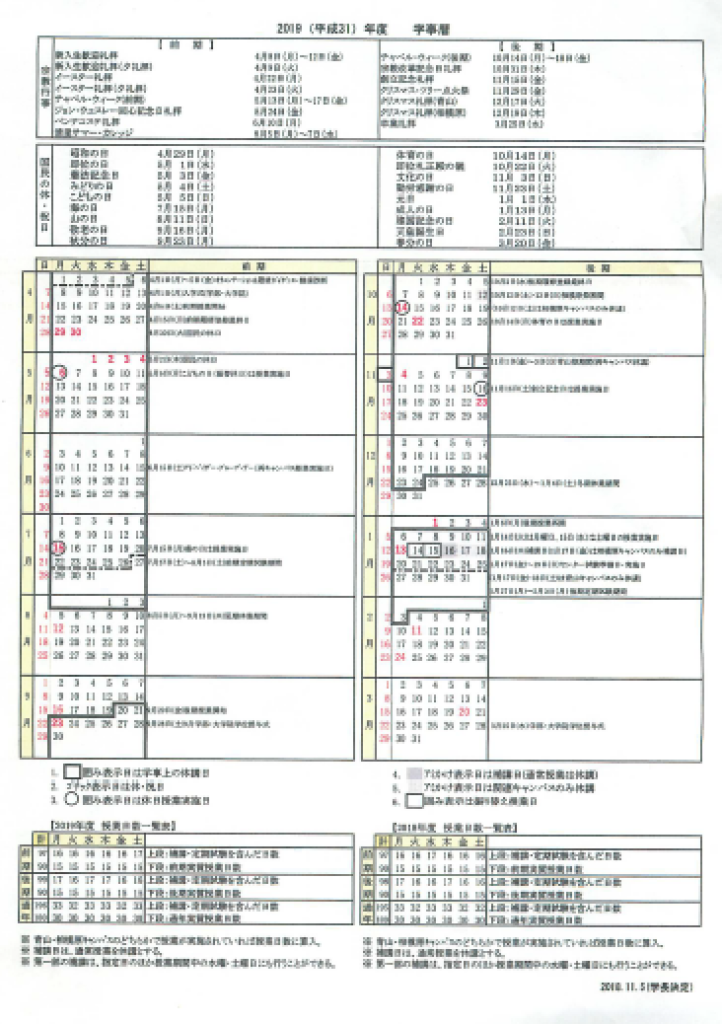 An English version of the academic calendar can be found at: http://aoyama-iec.sakura.ne.jp/wp/wp-content/uploads/ukeire_Academic_Calendar_2019-20-1.pdf .

Messages of Encouragement to New Students 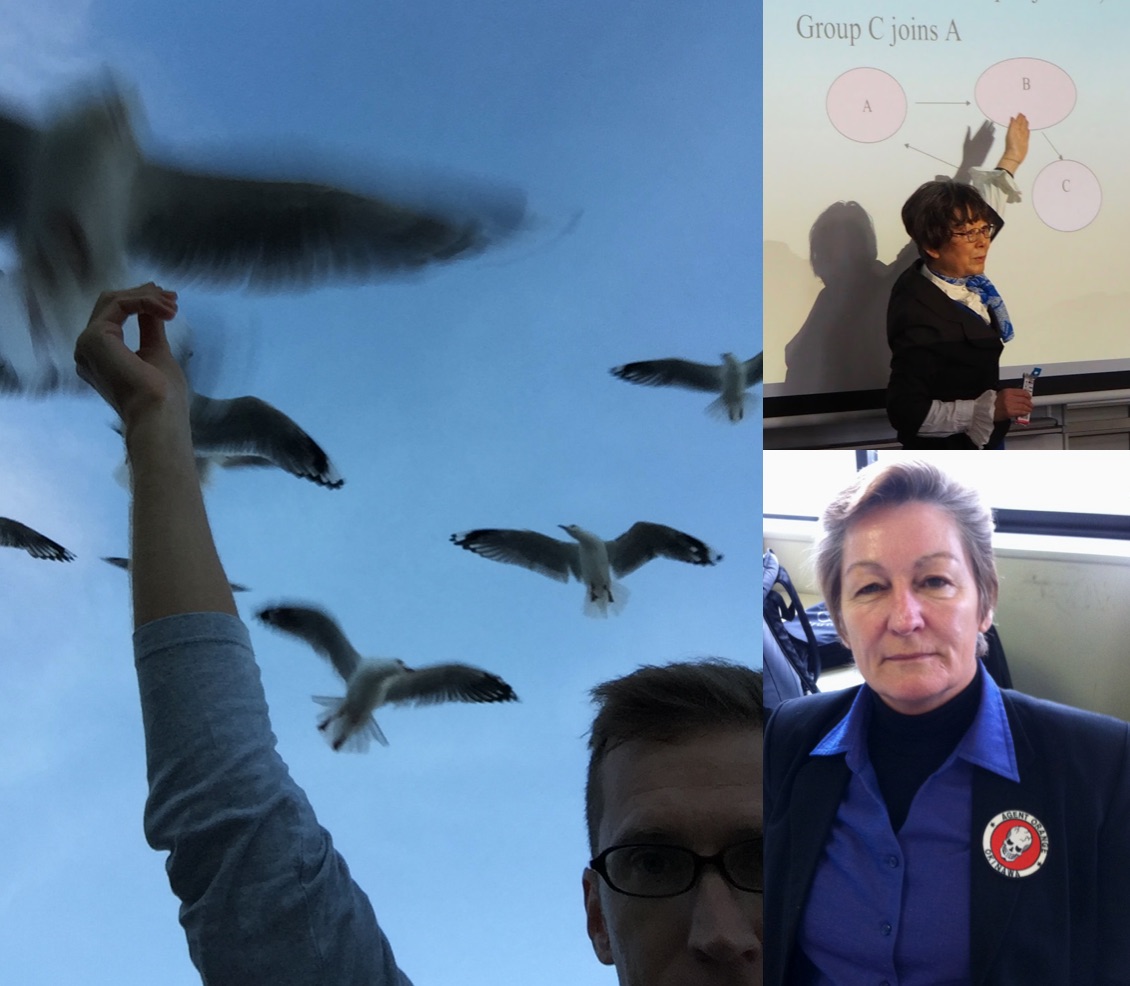 Make the most of your time at AGU and try to develop an interest in something that requires–or can be enhanced by–the use of English. Even better, make the most of being where you are and explore ways of contributing to the Rugby World Cup in 2019, and Olympics in 2020. Amazing international events right at your doorstep!

Welcome to the best program in Japan. I know you think everyone else has great English, is super cool, calm and better than you. Do not worry about it. This is just the outside image. Everyone is afraid of not being the best. Just remember that you have managed to get into one of the best universities in Japan and that Japan is a leading nation. Compare yourself to a farming woman from Mali, to a motor mechanic in Yemen, to an unemployed girl in Bolivia. You are one of the luckiest people in the world. Now enjoy your university life.

by Rachael Barat (former teacher in the program now teaching at a university in Phnom Penh, Cambodia)

If you follow the program, listen to the feedback of your professors, and write and rewrite over and over again it is really possible to learn to write English well, especially given the strong background in English that most of the students in the English Department have. I believe that it is indeed possible to learn how to write well using the methods outlined in the IE program.

by Mariko Yokokawa (former Writing instructor in the IE Program)

25th Year of the IE Program — Orientation for Teachers

This is the 25th anniversary of the Integrated English Program. We’d like to thank all of the teachers and students who have been part of the program through the years and helped to make it one of the best EAP (English for Academic Purposes) programs in Japan.

Will be hold the IE Teachers’ Orientation and 25th Annual Faculty Development Symposium on University English Teaching on the 31st of March. Click on the image (below) to view a PDF with the full details. Click here for the file in MS Word format.

Photos taken at the IE Orientation can be seen at https://aogaku-daku.org/the-ie-orientation-2018-25th-year-anniversary-edition/. 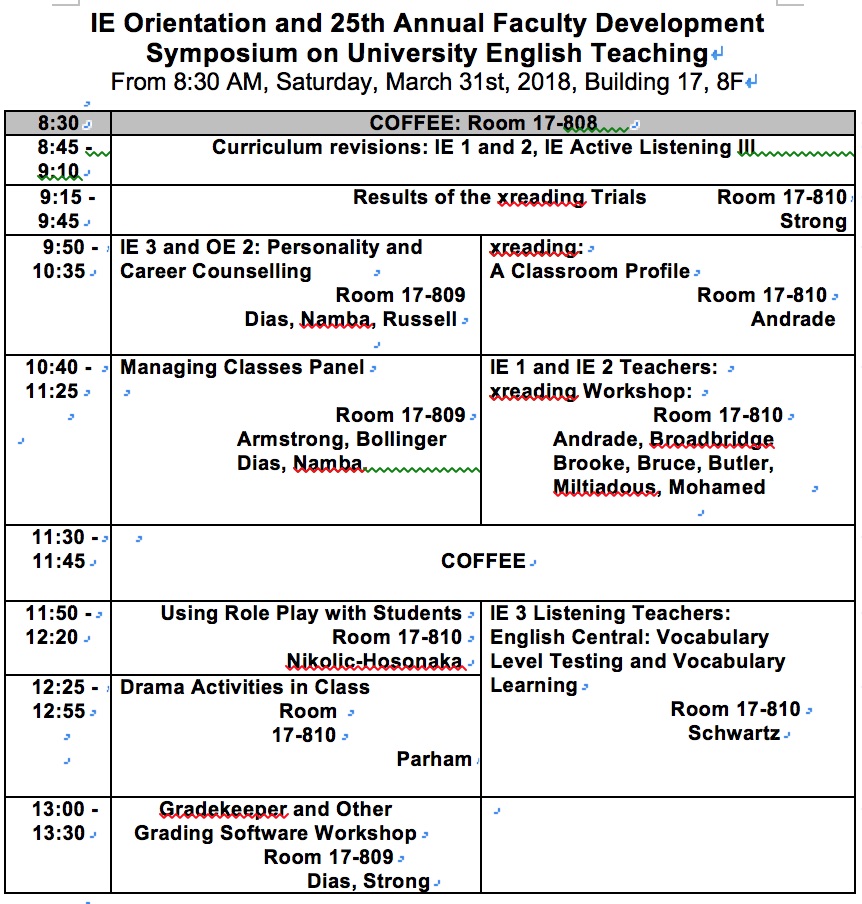 Voices of the IE Program Over Its 25-year History

At the lively JALT 2017 Conference, James Broadbridge, Greg Strong, Melvin Andrade, Jeff Bruce, and myself gave a well-attended talk on “Exploring Online and Autonomous Extensive Reading.” Here’s the blurb on it that ran in the conference handbook: “Extensive reading’s value for English language learners is well-documented. However, students need to read enough to realize gains in their abilities. This presentation describes an ongoing action research study of twelve classes of university sophomores using an integrated skills approach to maximizing the benefits of an online library of graded readers with an LMS that records time on task, reading rates, cumulative totals, and comprehension scores.” 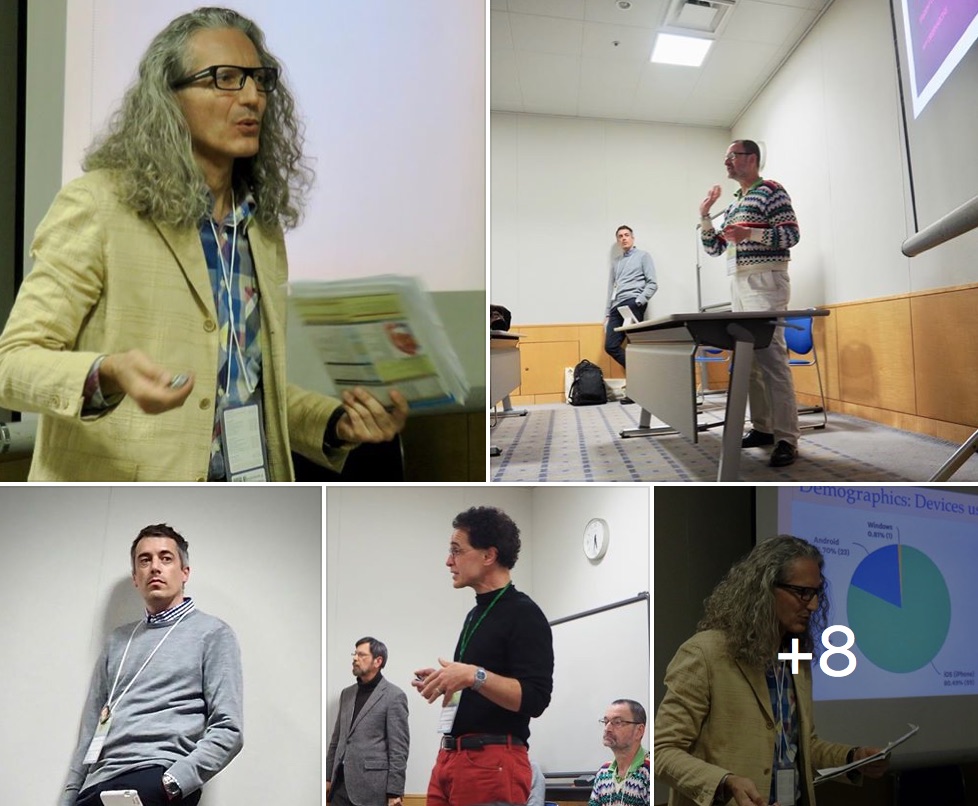 In the Lifelong Language Learning Forum at the JALT 2017 Conference in Tsukuba, Mitsue Allen-Tamai–along with her former MA student, Yumi Matsunaga, now an English teacher for elementary schools in Shinagawa Ward–gave an intriguing report on the effects of Allen-Tamai Sensei’s Story-Based Curriculum, which is being implemented at public elementary schools in Shinagawa. They emphasized the important role of gestures and sign language to enhance the students’ memorizing, recalling, and retaining of English.

A long-time friend and colleague, the indomitable Nena Hosonaka-Nickolic (Kanda University of International Studies), spoke about how to choose stories that capture the imagination of the learner and allow them to guess from context, rely on their own knowledge base, and use clues to decipher meaning. She demonstrated her approach using the charming children’s story, “A Happy Day.” Participants became mice, bears, ground hogs, and squirrels in retelling the story, creatively and with panache. [I was a mouse, which was appropriate as I was born in the Year of the Mouse.]

It was my pleasure to organize this forum and to see the joy on the faces of the participants who attended. Many thanks to Mitsue Allen-Tamai, Yumi Matsunaga, and Nena Hosonaka-Nickolic, and the cooperative and enthusiastic participants. — Joseph Dias 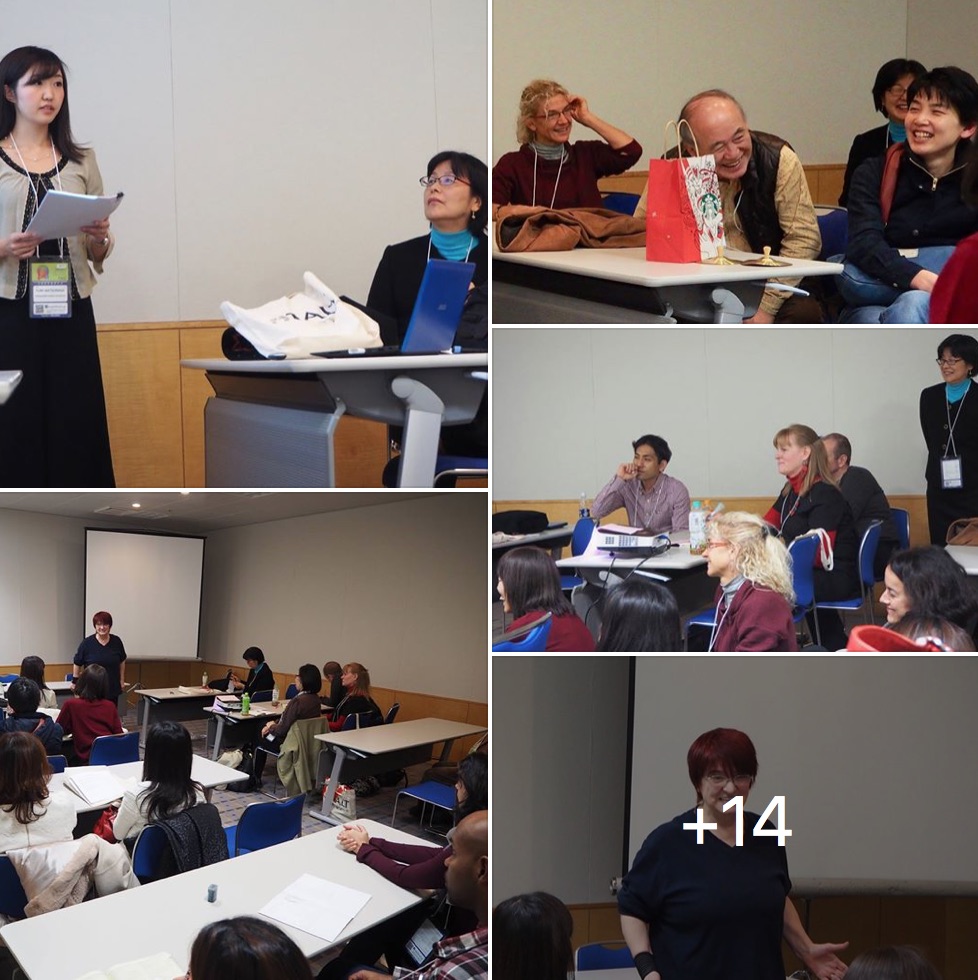 Click on the thumbnail of the Schedule for the 2018 Academic Year for a larger and clearer view.

Find an English version of the 2018/19 schedule at http://aoyama-iec.sakura.ne.jp/wp/wp-content/uploads/ukeire2018-2019_Academic_Calendar.pdf.

Many thanks to Prof. Matsuo Kimura for his great organizational skills and hard work in organizing AGU’s hosting of the JACET extravaganza.

From August 29th to the 31st, Aoyama Gakuin University held JACET’s 56th International Convention. Mitsue Allen-Tamai and I presented on EMI (English as a Medium of Instruction) and the (25-year) history of our department’s IE (Integrated English) Program, respectively. Henry Widdowson and Barbara Seidlhofer, of the University of Vienna, and Dr. Phyllis Ghim-Lian Chew of the Nanyang Technological University (Singapore), spoke on various aspects of ELF (English as a Lingua Franca).

It was an extremely well attended conference, with about 900 participants. It was good to see many old friends there and make some new ones. The plenary speakers were well chosen and productively provocative, especially Dr. Chew who challenged the mainly Japanese audience members to seriously consider how tiny Singapore could be at the top of PISA scores, GDP levels, overall English proficiency benchmarks, and university rankings, while Japan lags behind in so many domains.

She chalked it up mostly to the fact that English proficiency is closely tied to high attainment in all of these areas and, for Japanese, language is tied to identity so closely that English has always been “other” and something that the population is unwilling to embrace as their own. She stirred up some nationalistic sparring in the Q & A, with one South Korean co-panelist wondering out loud what the happiness index of Singaporeans might be. This spurred me to check it out. It seems that Singapore is ranked a respectable 16 (out of 155 countries listed), so Singapore—despite its caning and reputation of obsessiveness about cleanliness—seems to be doing a lot right. — Joseph Dias